Books to take your heart right out of your chest.... 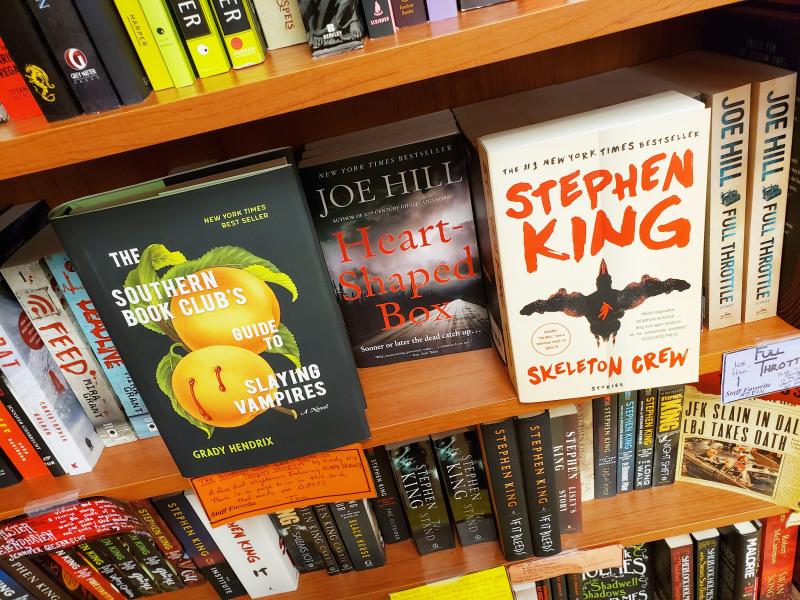 Oh...Hello. I guess since Valentine’s Day has passed, you’re looking for a palate cleanser, huh? Fair enough. Just follow me, through this doorway here. We’ll take the steps down.

Wait. Use the handrail. These stone steps can get slippery and you don’t want to touch the walls. Just trust me...Don’t. Touch. The walls.

Don’t worry about that. The lights do that from time to time. Use the handrail, one step at a time, and when we reach the bottom, you’ll know it.

There. I think we’ve...You see? The lights are back on. And here we are. Where to start? Let’s try this door-the Grady Hendrix suite. Step on in. As you can see, it looks fairly ordinary, doesn’t it? But one thing about Grady Hendrix. Nothing is as simple as it seems. Take this one for instance: The Southern Book Club’s Guide to Slaying Vampires. Imagine a well to do book club, populated by some very straight laced and dignified women in the Deep South who may have discovered a vampire in their midst. It’s a new take on the vampire story, with a different type of blood sucker. And it isn’t your usual band of Fearless Vampire Hunters, either. It’s honest, intense, maddening. See what I meant? Fairly ordinary, but has unique twists and turns.

Alright, then, we’ll try something else, then. Just down this hallway is a...No! No! Do not swipe at the cobwebs. I know, I know, it’s an automatic reaction. But the thing is, if you hit the webs, that sends a signal down the thread. You’re telling the...maybe 10 or 20...thousand...spiders, where you are. Just pass through them. Gently.

How about here? This is a newish wing. Just let me open this door...woah, we really need to get some grease on those hinges. Sounded just like a woman screaming, didn’t it.

Anyway, this is the Stephen Graham Jones suite. In here you’ll find one of the more prolific and original writers working today. The Last Final Girl, The Gospel of Z, and maybe best of all, The Only Good Indians. This is some creepy, ghoulish stuff. But also, pretty damn funny and if that wasn’t enough, Mr. Jones also manages to make some really candid observations about this world we live in. From a unique perspective, as well. He’s an Indigenous writer, so we can see the world through his particular lens. Any of his selections will purge all that lovey dovey stuff from February 14th right the heck outta your mouth.

No? Well, let’s keep going. Do you want to investigate the sub basement? It’s where we keep the classic stuff. You know, Shirley Jackson, Richard Matheson, even Peter Straub. For the pinnacle of Gothic horror, you couldn’t do better than Straub’s Ghost Story. Are you in a nightmare? A nightmare within a nightmare? Or, just living through all the old stories a group of old men are sitting around telling each other. You could---

What? That door? Well, that’s the Master Wing. Stephen King. You go in there, we won’t see again for a long time. Or ever. I’m just not sure if you’re ready for Jack Torrance, The Outsider, Randall Flagg, or especially Pennywise the Clown.

However...this is a relatively new suite, next to King. The Joe Hill suite and, yeah, it’ll be a wing before long. He’s next to King because he’s his son, and I gotta tell ya, the apple don’t fall far from the tree. See there? Heart Shaped Box. Imagine a story about a shock rocker...think Alice Cooper...who collects macabre items. Well, one day, while he is hanging out with his half-his-age girlfriend, he buys the wrong artifact. A heart shaped box. And as it turns out, it’s the genuine thing. He and his girlfriend have to go on the run while trying to save themselves and stop the “monster”. Very nice, very nice. Or, oh yeah, this is the latest, a graphic novel called Basketful of Heads. This is gory as all get out, great story, and you’ll laugh. In spite of yourself. Or you could grab ahold of Horns or NOS4A2...it’s up to you.

You what? You’ve changed your mind? I see. Well. That’s...disappointing, I must say. But, as you wish. Follow me, I’ll lead you out...oh, sorry about those lights again. Why don’t you just sit tight, we’ll wait for the power to come back on...while you reconsider whether you really want to leave.

How does that sound?