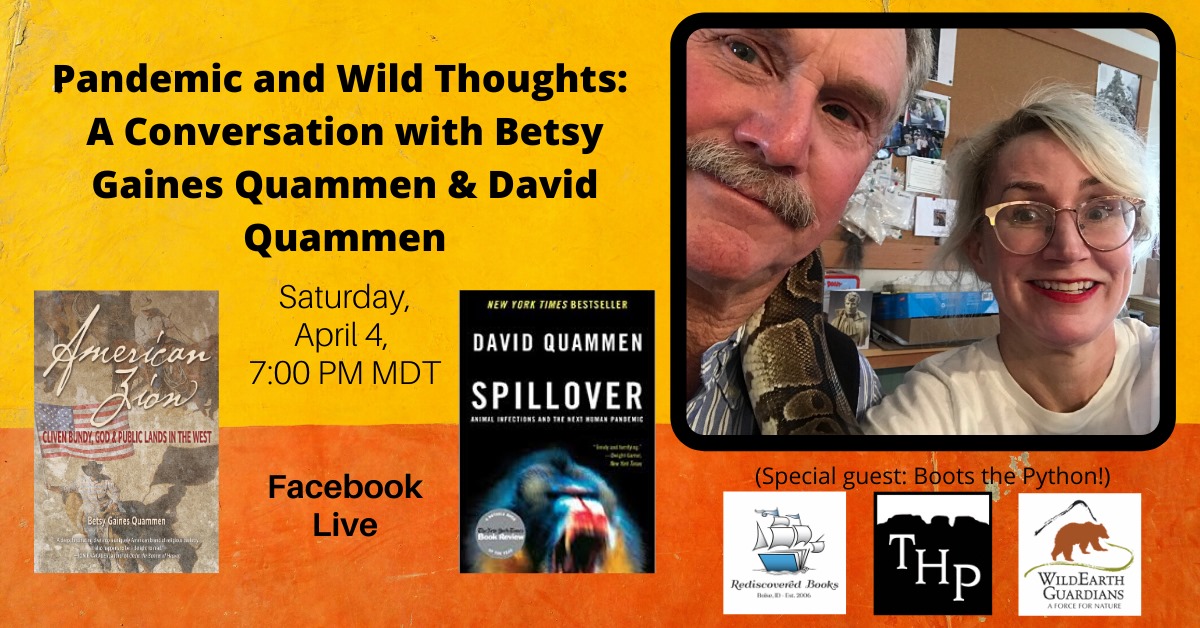 Join us for a virtual Facebook LIVE conversation with authors Betsy Gaines Quammen and David Quammen.

During this virtual gathering of book lovers and wilderness advocates, David will talk about his book Spillover: Animal Infections and the Next Human Pandemic and Betsy will discuss her book, American Zion: Cliven Bundy, God and Public Lands, finding topical intersections during this unique chapter in history. The Quammens will explore wild thoughts as conservation measures, wild thoughts as conspiracy, and more during their Facebook live-stream events, and welcome questions from viewers.

About American Zion: Cliven Bundy, God & Public Lands in the West by Betsy Gaines Quammen
What happens when members of an American religion—one built in the nineteenth century on personal prophecy and land proprietorship—assert possession over western federal lands, armed with guns and a certainty that God wants them to go to war? American Zion is the story of the ongoing feud between Mormon ranching family the Bundys, the federal government, and the American public. Historian Betsy Gaines Quammen examines the roots of the Bundys’ cowboy confrontations, and how history has shaped an often-dangerous mindset which today feeds the militia movement and threatens public lands, wild species, and American heritage.

“This book is like a skeleton key, unlocking so many complicated, and largely unquestioned, myths of the West.”
—ANNE HELEN PETERSEN, BuzzFeed News

“American Zion provides essential background for anyone concerned about the future of open space in the western United States. It also happens to be a delight to read.”
—JON KRAKAUER, author of Under the Banner of Heaven

Betsy Gaines Quammen is a historian and conservationist. She received a doctorate in Environmental History from Montana State University in 2017, her dissertation focusing on Mormon settlement and public land conflicts. She has studied various religious traditions over the years, with particular attention to how cultures view landscape and wildlife. After college in Colorado, caretaking for a bed and breakfast in Mosier, Oregon, and serving breakfasts at a café in Kanab, Utah, Betsy has settled in Bozeman, Montana,where she now lives with her husband, writer David Quammen, two huge dogs, an overweight cat, and a pretty big python named Boots.

About Spillover: Animal Infections and the Next Pandemic by David Quammen
The emergence of strange new diseases is a frightening problem that seems to be getting worse. In this age of speedy travel, it threatens a worldwide pandemic. We hear news reports of Ebola, SARS, AIDS, and something called Hendra killing horses and people in Australia―but those reports miss the big truth that such phenomena are part of a single pattern. The bugs that transmit these diseases share one thing: they originate in wild animals and pass to humans by a process called spillover. David Quammen tracks this subject around the world. He recounts adventures in the field―netting bats in China, trapping monkeys in Bangladesh, stalking gorillas in the Congo―with the world’s leading disease scientists. In Spillover Quammen takes the reader along on this astonishing quest to learn how, where from, and why these diseases emerge, and he asks the terrifying question: What might the next big one be?

“An adventure-filled page-turner…told from the front lines of pandemic prevention.”
—WIRED

David Quammen is the author of a dozen fiction and nonfiction books, including Blood Line and The Song of the Dodo. Spillover, his most recent book, was shortlisted for several major awards. A three-time National Magazine Award winner, he is a contributing writer for National Geographic and has written also for Harper's, Outside, Esquire, The Atlantic, Powder, and Rolling Stone. He travels widely on assignment, usually to jungles, mountains, remote islands, and swamps.

WildEarth Guardians is a non-profit conservation organization that protects and restores the wildlife, wild places, wild rivers, and health of the American West. Based in Santa Fe, New Mexico, we have offices in seven western states, including Boise, Idaho. Guardians believes in nature’s right to exist—and thrive. So many of our precious landscapes, be they forest, desert, river, grassland… need protection to ensure that they continue to offer peace, solitude and the special kind of healing only nature can provide during these uncertain times. That’s our passion. Our four programs—Wildlife, Public Lands, Rivers and Climate +Energy – work to ensure a system of protected and connected wildlands and rivers where native species thrive and people experience the primal power of the wild.

Spillover: Animal Infections and the Next Human Pandemic (Paperback)