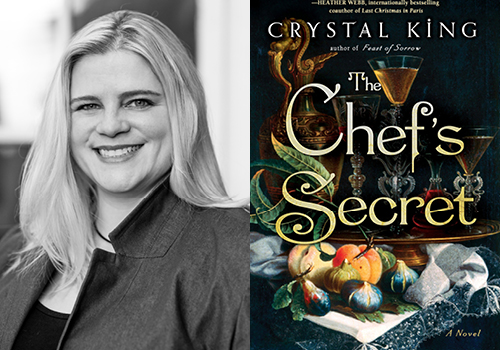 The name Bartolomeo Scappi appears again and again in the archives of Italian cuisine, but little is known about the life of the legendary chef who served the papacy and authored one of the bestselling cookbooks of all time. Now, Crystal King, author of the critically acclaimed historical novel Feast of Sorrow, has cooked up THE CHEF’S SECRET, a mouthwatering drama that combines the little known facts about Scappi’s life with hints of passion, dashes of betrayal, and a few drops of poison.

Crystal King is an author, culinary enthusiast, and marketing expert. Her writing is fueled by a love of history and a passion for the food, language, and culture of Italy. She has taught classes in writing, creativity, and social media at several universities including Harvard Extension School and Boston University, as well as at GrubStreet, one of the leading creative writing centers in the US. A Pushcart Prize–nominated poet and former co-editor of the online literary arts journal Plum Ruby Review, Crystal received her MA in critical and creative thinking from UMass Boston, where she developed a series of exercises and writing prompts to help fiction writers in medias res. She resides in Boston but considers Italy her next great love after her husband, Joe, and their two cats, Nero and Merlin. She is the author of Feast of Sorrow and The Chef’s Secret.

Feast of Sorrow: A Novel of Ancient Rome (Paperback)

The Chef's Secret: A Novel (Hardcover)

By Crystal King
Unavailable
ISBN: 9781501196430
Availability: Hard to Find - Item is most likely unavailable for the time being
Published: Atria Books - February 12th, 2019