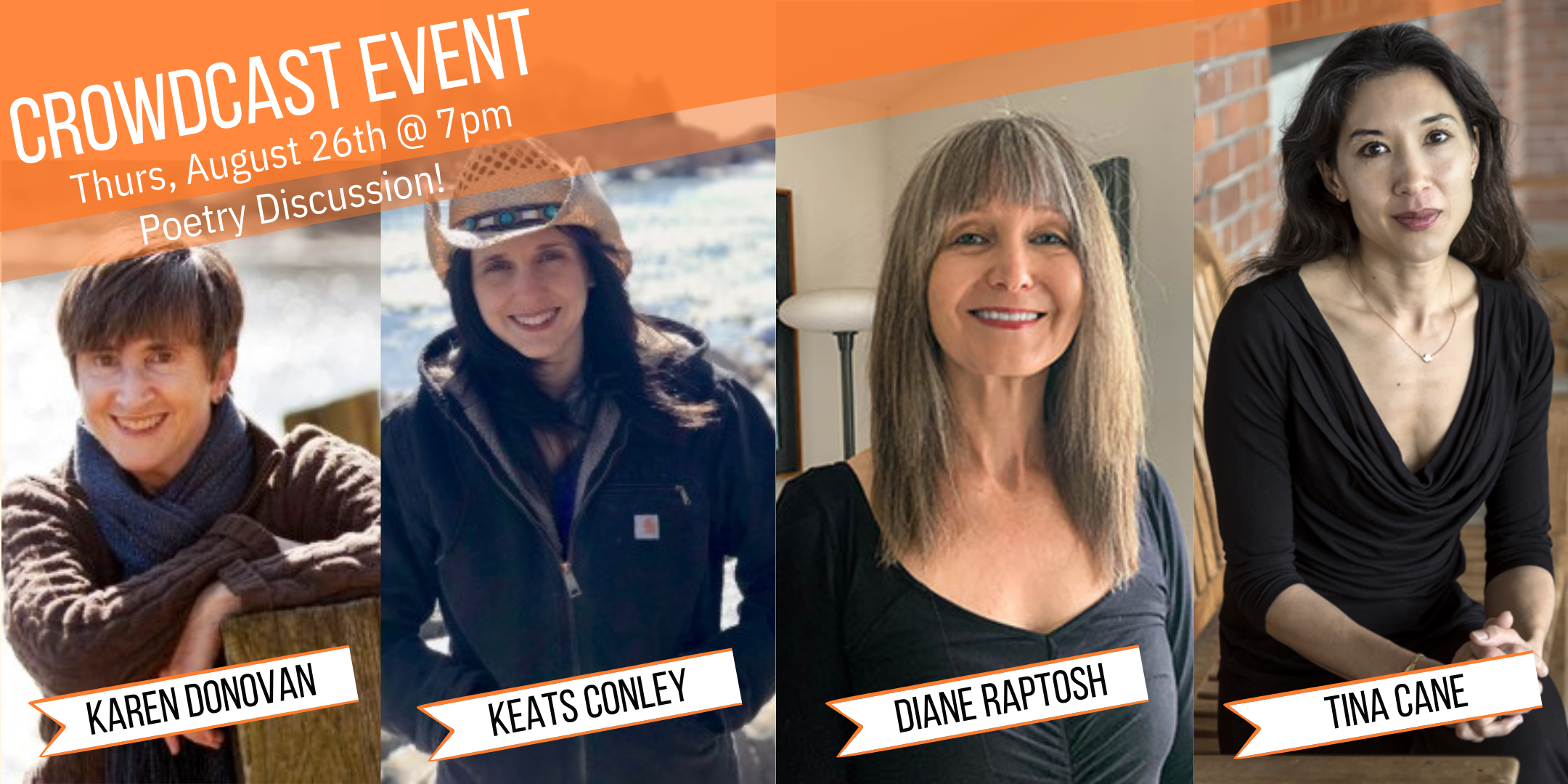 This is a virtual event taking place via CrowdCast. Follow the link below to register.

Come celebrate the power of Poetry on Crowdcast! We're proud to present Diane Raptosh, Tina Cane, Karen Donovan, & Keats Conley for a discussion about the intersection of poetry, feminism, nature, and everything in between.

Diane Raptosh’s verse collection, American Amnesiac (Etruscan Press), was longlisted for the 2013 National Book Award as well as for the Housatonic Book Award in poetry. The recipient of three fellowships in literature from the Idaho Commission on the Arts, she served as the Boise Poet Laureate (2013) as well as the Idaho Writer-in-Residence (2013-2016). In 2018 she won the Idaho Governor’s Arts Award in Excellence. An active ambassador for poetry, she has given workshops and readings everywhere from riverbanks to prisons. The holder of the Eyck-Berringer Endowed Chair in English, she teaches literature and writing at the College of Idaho, where she also co-chairs the program in criminal justice/prison studies. Run: A Verse-History of Victoria Woodhull, is her seventh book.

Tina Cane serves as the Poet Laureate of Rhode Island, where she is the founder and director of Writers-in-the-Schools, RI. She is the author of The Fifth Thought, Dear Elena: Letters for Elena Ferrante, poems with art by Esther Solondz, Once More With Feeling, and Body of Work. She was a 2020 Poet Laureate Fellow with the Academy of American Poets and is the creator/curator of the distance reading series, Poetry is Bread. Her new poetry collection, Year of the Murder Hornet, is forthcoming from Veliz Books in 2022, and her debut novel-in-verse for young adults, Alma Presses Play (Penguin/Random House), will be released in September 2021.

Karen Donovan's new collection of poems, Planet Parable (Etruscan Press), was published in 2021 in an innovative multi-author volume called Trio, which also includes complete books by the poets DianeRaptosh and Daneen Wardrop. Her two other books of poems are Your Enzymes Are Calling the Ancients (Persea Books), which won the Lexi Rudnitsky / Editor’s Choice Award, and Fugitive Red (University of Massachusetts Press), which won the Juniper Prize. She is also the author of Aard-vark to Axolotl (Etruscan Press), a collection of tiny stories and essays inspired by the illustrations in a vintage Webster’s dictionary owned by her grandfather. From 1985 to 2005 she co-edited ¶: A Magazine of Paragraphs, a journal of very short prose.

Keats Conley holds a doctorate in biology from the University of Oregon’s Institute of Marine Biology, where she spent six years researching gelatinous plankton. Her research has been published in reputable scientific journals such as Nature Microbiology, PLOS One, and Limnology and Oceanography. Keats now lives in southern Idaho and works as an environmental biologist to assess proposed management actions on fish and wildlife. She enjoys writing poetry as a means of sharing science with a broader audience, particularly to help cultivate a sense of urgency about global biodiversity loss. Guidance from the God of Seahorses is her first book.

Guidance from the God of Seahorses (Paperback)