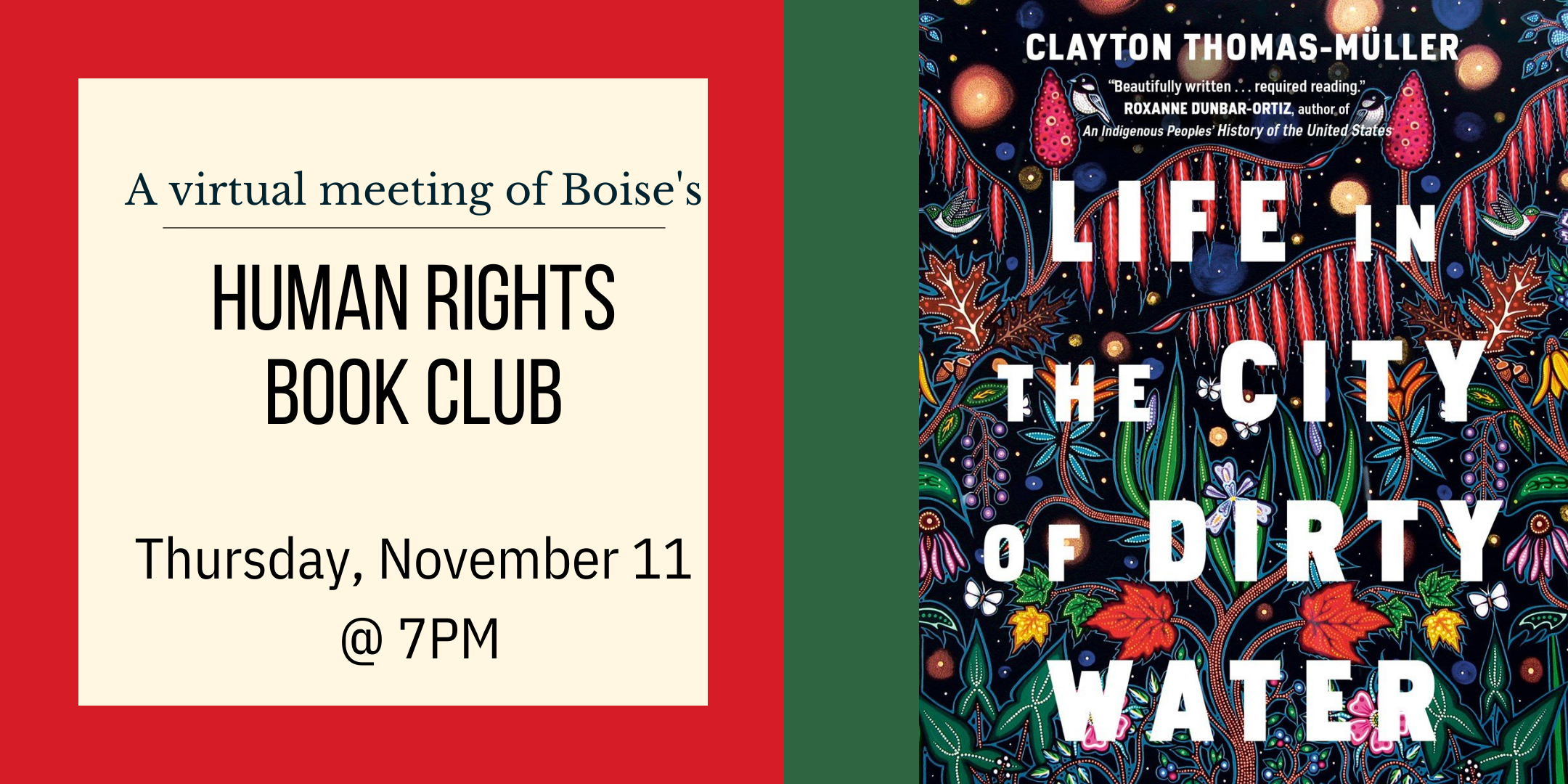 The Human Rights Book Club is dedicated to reading and discussing topics relevant to the advancement of global human rights.This group meets on the 2nd Thursday at 7 p.m. at Rediscovered Books in January, March, May, July, September, and November. Each meeting is moderated and a lively and insightful conversation among attendees is the norm.

Life in the City of Dirty Water by Clayton Thomas-Muller

About the Book:
An electrifying memoir that braids together the urgent issues of Indigenous rights and environmental policy, from a nationally and internationally recognized activist and survivor.

There have been many Clayton Thomas-Mullers: The child who played with toy planes as an escape from domestic and sexual abuse, enduring the intergenerational trauma of Canada's residential school system; the angry youngster who defended himself with fists and sharp wit against racism and violence, at school and on the streets of Winnipeg and small-town British Columbia; the tough teenager who, at 17, managed a drug house run by members of his family, and slipped in and out of juvie, operating in a world of violence and pain.

But behind them all, there was another Clayton: the one who remained immersed in Cree spirituality, and who embraced the rituals and ways of thinking vital to his heritage; the one who reconnected with the land during summer visits to his great-grandparents' trapline in his home territory of Pukatawagan in northern Manitoba.

And it's this version of Clayton that ultimately triumphed, finding healing by directly facing the trauma that he shares with Indigenous peoples around the world. Now a leading organizer and activist on the frontlines of environmental resistance, Clayton brings his warrior spirit to the fight against the ongoing assault on Indigenous peoples' lands by Big Oil.

Tying together personal stories of survival that bring the realities of the First Nations of this land into sharp focus, and lessons learned from a career as a frontline activist committed to addressing environmental injustice at a global scale, Thomas-Muller offers a narrative and vision of healing and responsibility.

CLAYTON THOMAS-MULLER is a member of the Treaty #6 based Mathias Colomb Cree Nation also known as Pukatawagan located in Northern Manitoba, Canada. He is a campaigner for 350.org, a global movement that's responding to the climate crisis. He has campaigned on behalf of Indigenous peoples around the world for more than 20 years, working with the Indigenous Environmental Network, Black Mesa Water Coalition, Global Justice Ecology Project, and Bioneers, among others. Clayton has led Indigenous delegations to lobby United Nations bodies, including the UN Framework Convention on Climate Change, UN Earth Summit (Johannesburg, 2002 and Rio+20, 2012) and the UN Permanent Forum on Indigenous Issues. He has coordinated and led delegations of Indigenous peoples to lobby government in Washington, DC, Ottawa, and the European Union (Strasbourg and Brussels).

Life in the City of Dirty Water: A Memoir of Healing (Hardcover)