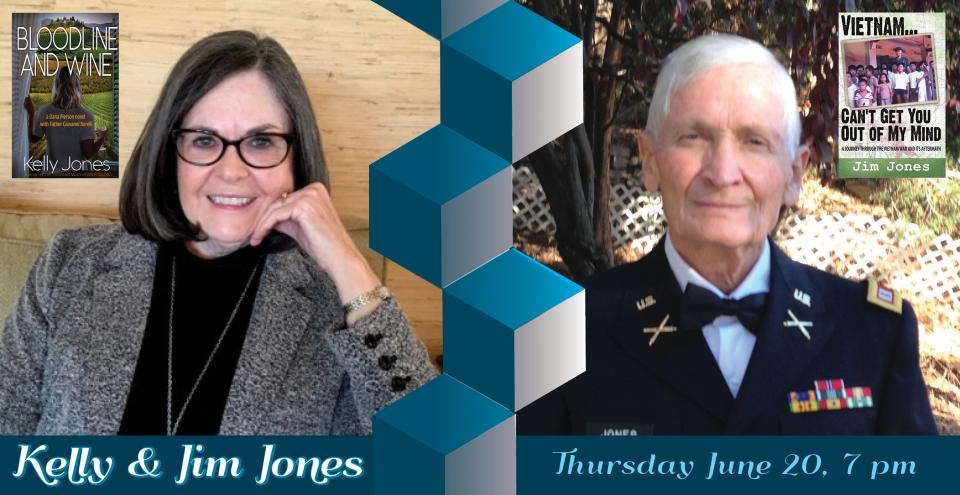 Kelly Jones grew up in Twin Falls, Idaho.  She spent her junior year of college in Italy at the Gonzaga-in-Florence program and developed a love for travel, a passion she now shares with her husband, Jim.  An art history class in Florence fueled a love for the history of art, which has become an integral part of her writing.  Her latest novel is Bloodline and Wine, a sequel to Lost and Found in Prague. Dana Pierson arrives in Tuscany to visit her friend Father Giovanni Borelli, expecting a week of sightseeing and relaxation at Borelli Vineyards. When someone breaks into the wine cellar, destroying millions of dollars’ worth of Brunello di Montalcino and killing the estate’s elderly caretaker, everything changes as they set out to discover who is responsible.

Berkley/ Penguin books include, Lost and Found in Prague (January, 2015), a novel of mystery, murder, and miracles; The Woman Who Heard Color (2011), a story of family loyalty, banned art, and creative freedom; The Lost Madonna (2007), set in Florence, Italy; and The Seventh Unicorn (2005), inspired by The Lady and the Unicorn Tapestries in the Cluny Museum in Paris, France.

Jim Jones grew up on his family's farm in Eden, Idaho.  When President John Kennedy challenged young people to ask what they could do for their country, Jim Jones decided on a career of public service. It has included service in Vietnam, work as a U.S. Senate staffer, eight years as Idaho Attorney General and twelve years on the Idaho Supreme Court.  This book chronicles Jim’s tour of duty in Vietnam--living and working with South Vietnamese forces, helping an orphanage, serving as an aerial artillery spotter, and getting to know the Vietnamese people.  Those 407 days in Vietnam have been the most powerful influence on his life ever since.

Jim’s earlier book, A Little Dam Problem: How Idaho almost lost control of the Snake River, was released in 2016. The book garnered him the Outstanding Achievement in the Humanities Award from the Idaho Humanities Council in 2017. He is now a would-be columnist, writing about military affairs, foreign and domestic policy, immigrants, refugees, climate change and a wide variety of other state and national topics