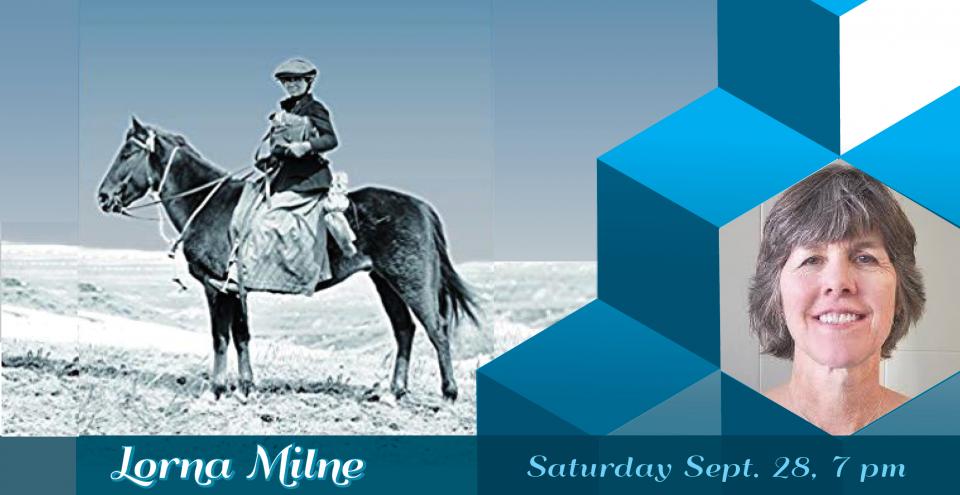 Join us at Rediscovered Books for a conversation with Biographer Lorna Milne about Evelyn Cameron (1868 - 1928), a pioneer photographer who settled in Eastern Montana in 1889.

In 1889, Evelyn Cameron was a young spunky British woman of genteel upbringing who set sail for the United States against her family's wishes. She traveled with a friend, Ewen Cameron, the man who later became her husband. They were bound for eastern Montana to hunt big game along the Yellowstone River, only thirteen years after the Battle of the Little Bighorn. The next fall the Camerons returned to England, packed up, and moved to Montana, where they lived for the rest of their lives. They first rented a ranch on the Powder River, among other British expatriates, to raise polo ponies for export to England. After years of limited success in the pony trade, they bought a small herd of cattle, settling into a more dependable existence of ranching and market gardens. Biographer Lorna Milne uses diaries and letters to reconstruct how Evelyn lived in the harsh eastern Montana landscape and how she became an extraordinary photographer. Evelyn may have been born in England, but through heart and temperament, she was a true Westerner. She was resourceful, hard working, observant, artistic, adaptable. According to her contemporary, a traveling Englishwoman, Evelyn was described as one of the great wonders of Montana.

This book was chosen for Montana's entry for "52 Great Reads".

Lorna Milne writes from Helena, Montana, where she lives on a small farm with her husband and a soccer-playing, fowl-herding sheep dog named Little Bear. Milne has published essays and short stories in periodicals such as Frontiers: A Journal of Women Studies, The Boston Globe Magazine, The Gettysburg Review, Walking, Orion, Highlights for Children, and The Sun. She is a University of Montana journalism graduate who teaches writing and literature at Carroll College. Milne grew up in eastern Montana, near the Camerons’ homesteads. This is her first biography.

Lorna will be signing books after the event.