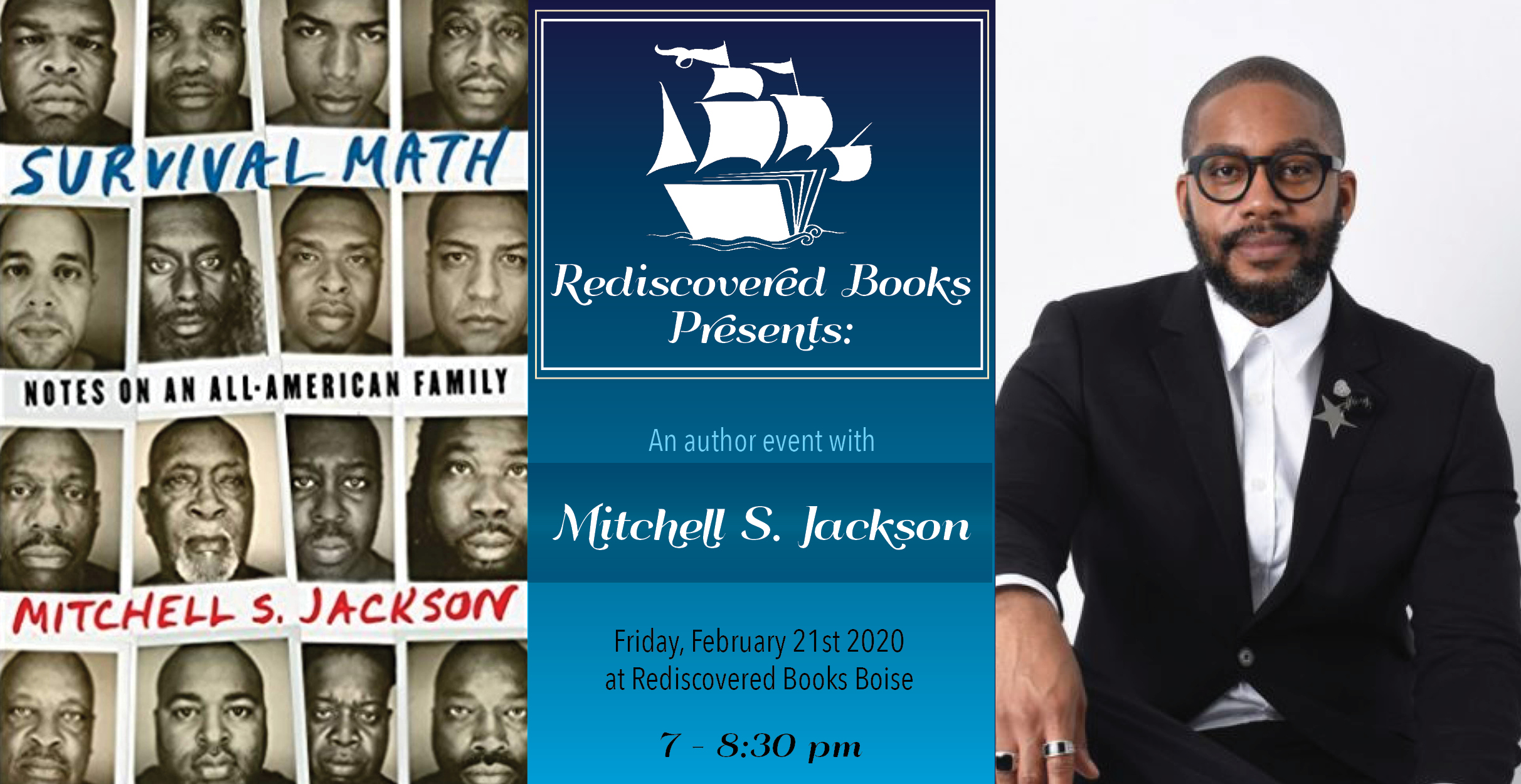 Join Rediscovered Books, in partnership with the Wassmuth Center and the Idaho Black History Museum, for an evening with Mitchell Jackson as we discuss his recent book, Survival Math:  Notes on an All-American Family at Rediscovered Books - Boise.

An electrifying, dazzlingly written reckoning and an essential addition to the national conversation about race and class, Survival Math takes its name from the calculations award-winning author Mitchell S. Jackson made to survive the Portland, Oregon of his youth.

This dynamic book explores gangs and guns, near-death experiences, sex work, masculinity, composite fathers, the concept of “hustle,” and the destructive power of addiction—all framed within the story of Jackson, his family, and his community. Lauded for its breathtaking pace, its tender portrayals, its stark candor, and its luminous style, Survival Math reveals on every page the searching intellect and originality of its author. The primary narrative, focused on understanding the antecedents of Jackson’s family’s experience, is complemented by poems composed from historical American documents as well as survivor files, which feature photographs and riveting short narratives of several of Jackson’s male relatives. The sum of Survival Math’s parts is a highly original whole, one that reflects on the exigencies—over generations—that have shaped the lives of so many disenfranchised Americans. As essential as it is beautiful, as real as it is artful, Mitchell S. Jackson’s nonfiction debut is a singular achievement, not to be missed.

Mitchell S. Jackson’s debut novel The Residue Years (Bloomsbury) received wide critical praise. Jackson is the winner of a Whiting Award. His novel also won The Ernest J. Gaines Prize for Literary Excellence and was a finalist for The Center for Fiction Flaherty-Dunnan First Novel Prize, the PEN / Hemingway Award for Debut Fiction, and the Hurston / Wright Legacy Award. His honors include fellowships from the New York Public Library’s Cullman Center, the Lannan Foundation, the Ford Foundation, PEN America, TED, the New York Foundation for the Arts, and the Center for Fiction. His writing has been featured as cover stories for Time Magazine and Esquire Magazine, as well as in The New Yorker, Harpers, The New York Times Book Review, The Paris Review, The Washington Post Magazine, The Guardian and elsewhere. His nonfiction book Survival Math: Notes on an All-American Family (Scribner) was published in the spring of 2019 and named a best book of the year by numerous publications, including NPR, Time Magazine, The Paris Review, The Root, Kirkus Reviews, Esquire Magazine, and Buzzfeed. Jackson teaches creative writing at the University of Chicago.

Jackson is also a well-regarded speaker who has delivered lectures and key note addresses all over the world, including the annual TED Conference, the Ubud (Bali) Writers and Readers Festival, and the Sydney Writers’ Festival, as well as at esteemed institutions, among them Yale University, Brown University, Cornell University, and Columbia University. A formerly incarcerated person, Jackson is also a social justice advocate who, as part of his outreach, visits prisons and youth facilities in the United States and abroad.