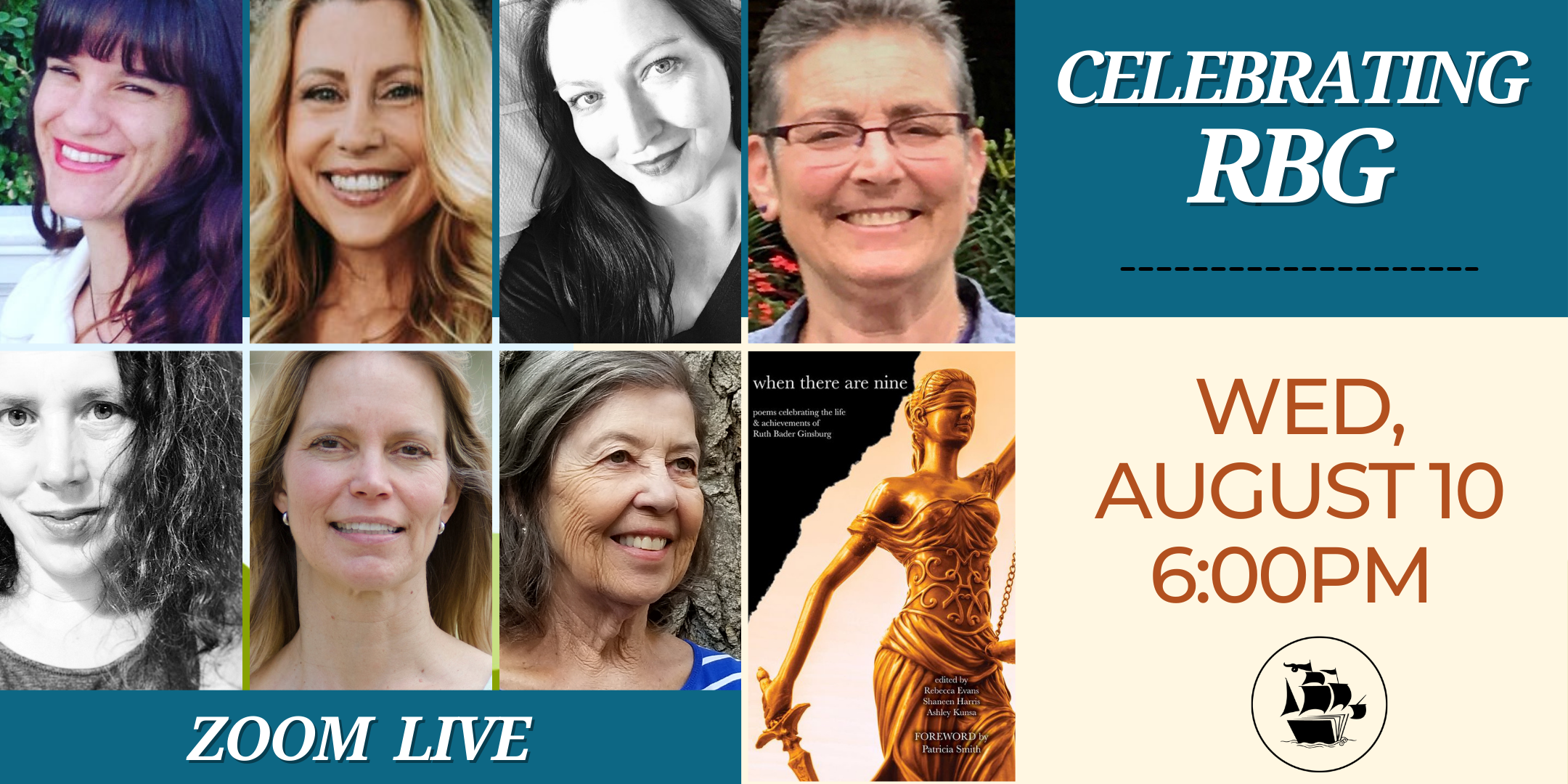 Celebrate the 29th Anniversary of the swearing in of Ruth Bader Ginsburg as the second female Supreme Court Justice by attending a virtual poetry evening dedicated to the life and work of RBG as a part of the RBG Readings and Conversations.

when there are nine is a chapbook of poems in tribute to the life and work of Ruth Bader Ginsburg. Award-winning poet Patricia Smith penned the forward and contributors of when there are nine include Faylita Hicks, Brian Turner, and Chelsea Dingman, among others. With RBG as the focal point, the chapbook underscores the human condition and creates connections across borders and boundaries.

When asked how many women on the Supreme Court will be enough, Ruth Bader Ginsburg once replied, "When there are nine." The cultural and feminist icon's indelible impact on innumerable people comes alive in these poems. The poets testify. With grace, dissent, and power, these poets do her justice. This is a necessary and inspiring literary act. It is also a reminder of the work still to be done. --- Lee Herrick

Gayle Brandeis is the author, most recently, of the memoir The Art of Misdiagnosis, and the novel in poems, Many Restless Concerns. Earlier books include the poetry collection The Selfless Bliss of the Body, the guidebook Fruitflesh: Seeds of Inspiration for Women Who Write, and the novels The Book of Dead Birds, which won the Bellwether Prize for Fiction of Social Engagement judged by Barbara Kingsolver, Toni Morrison, and Maxine Hong Kingston. Self Storage, Delta Girls, and My Life with the Lincolns, which was chosen as a state-wide read in Wisconsin. Her poetry, essays, and short fiction have been widely published in places such as The New York Times, The Washington Post, O (The Oprah Magazine), The Rumpus, Salon, Longreads, and more, and have received numerous honors, including a Barbara Mandigo Kelly Peace Poetry Award, Notable Essays in Best American Essays 2016, 2019 and 2020, the QPB/Story Magazine Short Story Award and the 2018 Multi Genre Maverick Writer Award. She served as Inlandia Literary Laureate from 2012-2014 and currently teaches at the University of Nevada, Reno at Lake Tahoe and Antioch University Los Angeles.

Carla Schick is a Queer activist for liberation, educator & union activist, lover of jazz and language. Long time Bay Area writer, originally from New York; they have worked in solidarity with Palestinian liberation and for an educational system that empowers our students. Published in SF City College’s Forum, Milvia Street, Sinister Wisdomand online at The Write Launch, A Gathering of the Tribes & Just Place.

Margaret Koger is a Lascaux Prize finalist and creative writing teacher from Boise, Idaho. As a National Endowment for the Humanities Teacher/Scholar, she researched the interplay between nature and the economy during the settlement of the North American West. Her poetry appears in numerous journals, including, Amsterdam Quarterly, Collective Unrest, Thimble, Inez, Headway, Burning House, Voice of Eve, Tiny Seeds Literary Journal , and Ponder Savant. Her recent book, What These Hands Remember (Kelsey Books) will be available Fall, 2022.

Siân Killingsworth (she/her) has been published or is forthcoming in Roi Fainéant Press, Typehouse Literary Journal, Stonecoast Review, Glass: A Journal of Poetry (Poets Resist), elsewhere. She is the Anthology Editor for the Marin Poetry Center, host/curator of the Second Sunday Readings series, and a poetry reader for the Kitchen Table Quarterly. Find her on Twitter: @sianessa and @2ndSundayPoetry.

Tami Haaland is the author of three poetry collections, most recently What Does Not Return. Her poems have appeared in many periodicals and anthologies, including, Consequence, The American Journal of Poetry, Ascent, The Ecopoetry Anthology, and Healing the Divide. Her work has also been featured on The Slowdown, The Writer’s Almanac, Verse Daily, and American Life in Poetry. She was one of many poets who collaborated with UK filmmaker Anna Cady on her Elemental Dialogue series which was shown at festivals and venues in England and Scotland. A former Montana Poet Laureate, Haaland is a professor of creative writing at Montana State University Billings.

Rachel Rix received her MFA in Creative writing from the University of Nevada, Reno at Lake Tahoe. Her poems have been published in Nebo, and The Ravens Perch; and are forthcoming in WLA. She was shortlisted for the Billy Collins Fish Anthology 2020 poetry contest. Rachel currently lives in Sacramento, CA where she is a CMT. She lives with her husband Adam and their two cats, Floppy and Leo.

Pre-orders for when there are nine is available via Moon Tide Press.