Four Treasures of the Sky by Jenny Tinghui Zhang 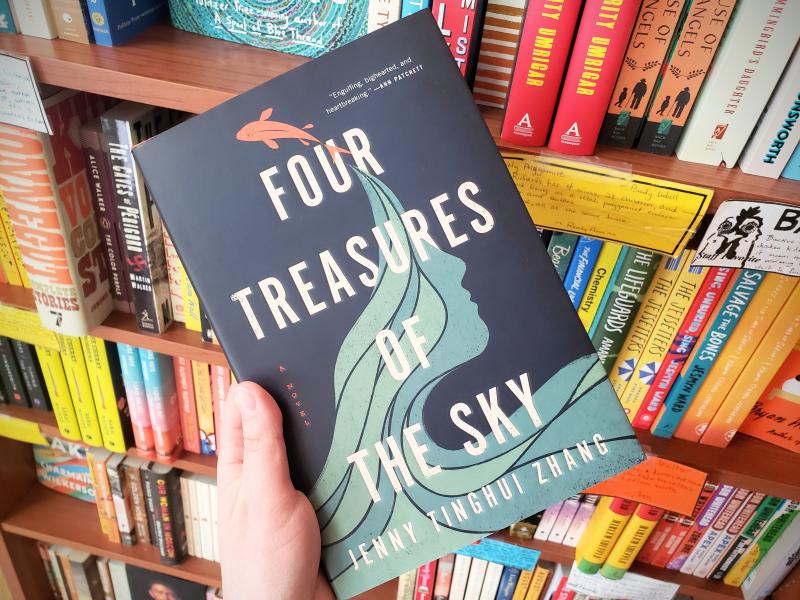 ​​History often presents us with stories that we simply do not want to hear and, yet, we need to hear them to truly understand who we are as a people, as a nation.  Jenny Tinghui Zhang's debut novel, Four Treasures of the Sky, does just this as it explores an aspect of the 19th century American West that many simply have not wanted to grapple with then or now -- anti-Asian sentiment and the violence that follows it.  The contributions of the Chinese to the building of the American West has been relegated to mining and the building of the railroads, but there is so much more to the story.

Zhang's book is rooted in the discovery of a historical marker describing the hanging of 5 Chinese men in central Idaho and from this historical marker grew Four Treasures of the Sky. Four Treasures of the Sky provides us with a story that reflects the lack of cultural understanding of the immigrant experience, the lack of wholesale community assimilation, and the "otherness" of a culture that seemed so foreign, and yet mesmerizing, to the whiteness of the American West.

Zhang's story begins with Daiyu as a small girl and follows her rocky and disjointed life's journey after the loss of her parents to internal Chinese culture wars.  Driven by poverty and the inability to provide, Daiyu's grandmother dresses the girl as a boy and sends them out into the world to hopefully find a better life.  Diayu's story ebbs and flows as Daiyu, now a young boy Feng, finds a temporary respite working as a cleaner at a Calligraphy school in China and learning calligraphy on the sly.

Feng then gets kidnapped from a local market, held prisoner for a year to learn English, and gets trafficked (in a coal bucket) overseas to the United States, ending up being sold to a brothel in San Francisco.  This fate befell more than one Chinese girl and Feng, now Peony, vaccilates between working days in a Chinese laundry and nights as a prostitute.  Zhang's section on the inner workings of a Chinese brothel is insightful and deeply moving.  Each girl, now named for an exotic flower or creature, nightly entertains white customers and other people of influence.  But the girls regularly disappear and are replaced with new blood as they lose market share, age out of favor, become pregnant, or simply get on the wrong side of the Madam.  But even the Madam is a victim in this story working under the thumb of the triad and expected to provide inroads to white culture for other more affluent Chinese.

Peony's escape is facilitated by a half-Chinese bastard son of a wealthy white patron and Peony, now Jacob Lee, heads to the wilds of Idaho looking for work in the mines. This journey is not an easy one for many reasons (which I will not enumerate here) and alone Jacob ends up in Pierce, Idaho. Jacob's life in Pierce is not quite the place of safety and acceptance that he hopes that it will be.  But for a brief moment, his employment with shopkeepers Nam and Lum and his friendship with violinist virtuoso Nelson Wong seems to harken a time of peace for Jacob.  However, in the long run this is not to be.  With the uncertainty of the mining industry and the economics of the boom/bust cycle of mining, anti-Chinese sentiment in Pierce rears its ugly head, threatening any semblance of acceptance that Jacob, Nelson, Nam and Lum have sought and hoped for.

Throughout the entire novel, Diayu has simply wanted to find her way home and carve a place in the world where she can thrive and exist as herself.  Diayu's external journey is also reflect in an internal one as she attempts to break the hold of legend Lin Daiyu, the tragic figure for whom she was named.  However, this is not to be.  Constantly longing for the past and fighting to find her way home, Daiyu's journey ends violently and suddenly.

Sadly, this segment of Westward Expansion and anti-Chinese sentiment in the 19th century is one that has been whitewashed and even blatantly ignored in western lore and individual state histories. Throughout the entire story, Daiyu's (Feng, Peony, Jacob) journey reflects the historically recorded stories of anti-Chinese violence and treatment of Chinese immigrants in the US, on a personal level and as a nation. Fueled by a changing economy, the decline of the mining industry, and the passing of the Chinese Exclusion Act of 1882, violence against Chinese immigrants escalated in the 19th century. These incidents included the violent Rock Springs Massacre in 1885 and equally heinous Los Angeles Massacre of 1871.  This underlying anti-Asian sentiment has even been reflected in contemporary political narrative and actions around the recent CoVid-19 pandemic.

The mythology of the West, and of America’s origin itself, has become a story of white conquest and taming of the land including that same conquest and "taming" of Native Americans, Black freedmen, and Chinese immigrants.  My sincere hope is that Jenny Tinghui Zhang's Four Treasures of the Sky provides us an opportunity to rectify this exclusion from history and tell a fuller, more accurate story.