Looking for an exclusive gift for history and mystery lovers? Here it is. 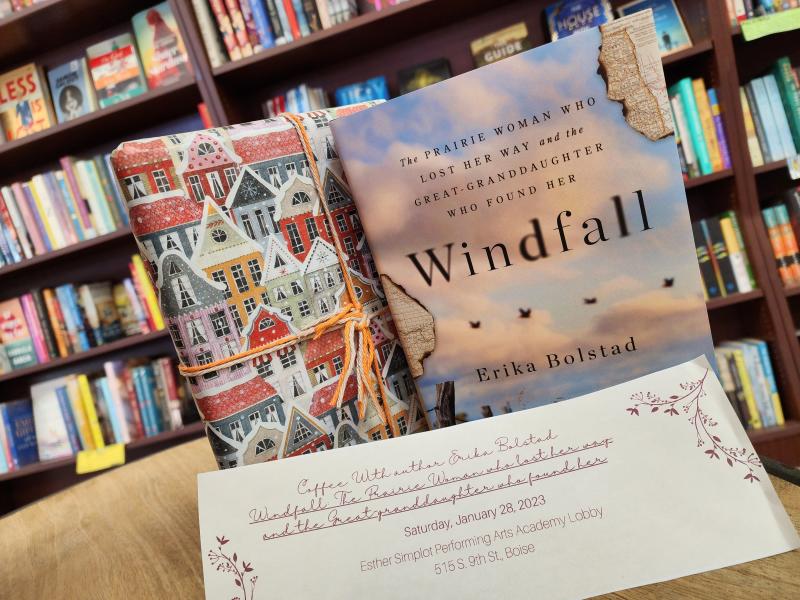 Buy a ticket (or two) to meet author and journalist Erika Bolstad over coffee and talk about her book, Windfall: The Prairie Woman Who Lost Her Way and the Great-Granddaughter Who Found Her at the Esther Simplot Performing Arts Academy on Saturday, 1/28/2023, 10 - 11:30 A.M..  This is a limited seating, ticket required event.

And the best part is that you can get the book now, almost one month before its official release date AND it comes gift wrapped! We have exclusive rights to sell the book for this event only from today until January 17th.  Coffee and tasty noshes will be provided from local businesses.

Tickets can be purchased via EventBrite or on our website.

Author Erika Bolstad was shocked to learn she had inherited mineral rights in North Dakota in the throes of an oil bonanza. Determined to unearth the story behind her unexpected inheritance, she followed the trail to her great-grandmother, Anna, who her family had painted to be a courageous homesteader who paved her way in the unforgiving American West. But, Bolstad discovers a darker truth about Anna that her family had ever shared. With journalistic rigor, she unearths a history of environmental exploitation and genocide as well as the modern-day consequences of the Great Plains Dream: we could be rich.

At first, Erika Bolstad knew only one thing about her great-grandmother, Anna: she was a homesteader on the North Dakota prairies in the early 1900s before her husband committed her to an asylum under mysterious circumstances. As Erika's mother was dying, she revealed more. Their family still owned the mineral rights to Anna's land--and oil companies were interested in the black gold beneath the prairies. Their family, Erika learned, could get rich thanks to the legacy of a woman nearly lost to history.

Anna left no letters or journals, and very few photographs of her had survived. But Erika was drawn to the young woman who never walked free of the asylum that imprisoned her. As a journalist well versed in the effects of fossil fuels on climate change, Erika felt the dissonance of what she knew and the barely-acknowledged whisper that had followed her family across the Great Plains for generations: we could be rich. Desperate to learn more about her great-grandmother and the oil industry that changed the face of the American West forever, Erika set out for North Dakota to unearth what she could of the past. What she discovers is a land of boom-and-bust cycles and families trying their best to eke out a living in an unforgiving landscape, bringing to life the ever-present American question: What does it mean to be rich?