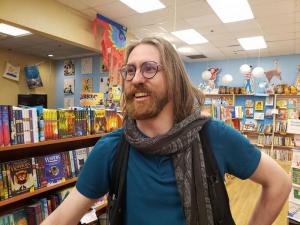 How did you come to work at Rediscovered Books?

I was a customer first, coming in when Rediscovered first opened up on the bench. Later, as a storyteller I talked with Laura and Bruce about doing performances there, story times and picture book readings. In 2016 when I had come off of a tour with Idaho Theater for Youth, I reached out to see if there was any open spot for a bookseller and was hired on in June.

Describe what you do at RD books in under 10 words.

I curate connections and tend to beloved literary friends.

What was the last book you read that you loved?

Trick question: I've been rereading the Murderbot Diaries in preparation for the next installment, but the last discovery was FIrewatching by Russ Thomas, a queer thriller in Yorkshire.

What was a book you read on a recommendation from someone else that you wouldn’t have picked up otherwise?

Laura put Going Postal by Terry Pratchett into my hands in highschool, and introduced me to the wonders of Discworld (after I'd turned my nose up at the Color of Magic from the library years before). For which I am forever grateful to her.

Do you have a favorite reading spot?

Several. In bed on the morning of my day off. The couch in my childhood home next to the windows. A particular tree I called Frances on the lakeshore of Chicago.

Is there a book you re-read every year?

Rowan and the Ice Creepers by Emily Rhodda. Generally around Christmas, or whenever the first real snowfall is.

Do you have a favorite part about working at the store?

The thrill of the hunt when you know exactly what book a customer requires (whether they asked for it specifically, or if they've given you a description that fits it perfectly) and putting it into their hands so their eyes light up.