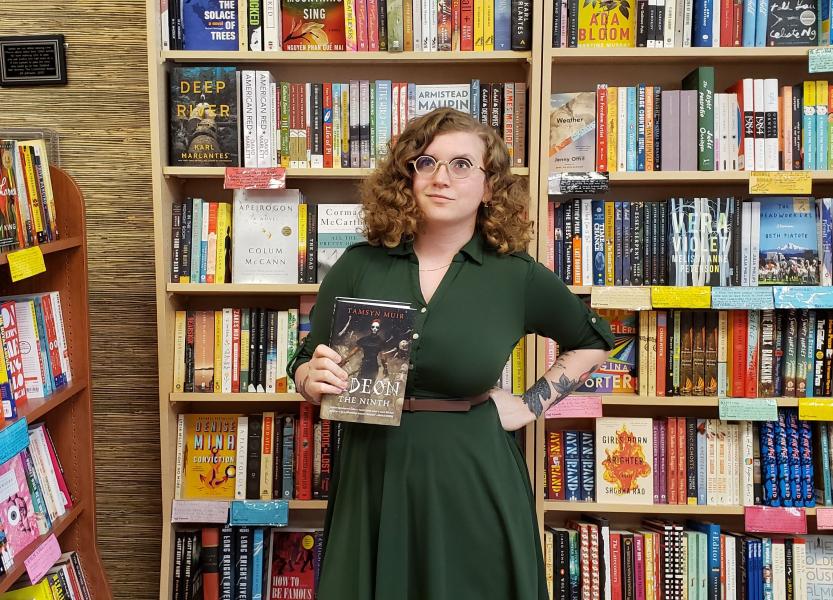 How did you come to work at Rediscovered Books?
An abundance of luck, perfect timing, and years of being a loyal customer who read voraciously. I applied at the end of the summer in 2017 and my interest in graphic design and past photography experience made me a good fit for the store's emerging need for someone to do more of our marketing and social media.

Describe what you do at Rediscovered Books in under 10 words.

Visual media wizardry in addition to matching books with people.

What was the last book you read that you loved?

That is a deeply unfair question! I've been lucky with my recent selections, but the one I've loved the most in recent weeks was probably The Galaxy and the Ground Within by Becky Chambers. She's one of my favorite sci-fi authors for a swath of reasons, but one of the biggest is the amount of hope all of her writing is imbued with. The reality she's crafted for her books may be set in the distant future, but it's one of my favorites to return to again and again whenever I need a winding adventure and renewed faith in the good of humanity.

What was a book you read on a recommendation from someone else that you wouldn’t have picked up otherwise?

Finlay Donovan is Killing It by Elle Cosimano. It was one of the most delightfully surprising mysteries I've picked up in ages with an unexpected and hilarious protagonist that I want the world for! Finlay is a struggling suspense novelist whose life is already falling apart around her when she is mistakenly hired as a hitwoman. In trying to set the record straight she only further entangles herself in both the hit and later investigation. Hijinx and hilarity ensue.

Favorite reading spot?
A handsome patch of shade near some water in the wilds of Idaho. You see, camping or hiking with me is an ongoing search for the perfect place to settle in with a good book, of which there is an endless variety. (bonus points if the setting adds to the book's particular ambiance)

Book you re-read every year?
The Bear Who Wasn't There: and the Fabulous Forest by Oren Lavie. It's a really fun read aloud to begin with by way of being an unusual story with colorful characters, but I LOVE reading it to adults in particular for two reasons. For starters more adults should read picture books, and with this one kids will enjoy it whilst the adults have a small existential crisis by the end of page three.

Favorite part about working at the store?
It's a tie between the people I get to work with and the backlog of book knowledge I've absorbed by working here. Our staff is populated by artists, actors, and teachers with warm hearts and brilliant minds who make me laugh every day that I work with them. As for book knowledge, you kinda feel like a superhero when someone comes in asking for a title and you can walk right to it all while telling them about three others they might enjoy if they like that one! Plus I love it when friends from other corners of my life ask me book questions like I'm some cryptic book witch!

Do you have any good bookstore stories?
I accidentally caught a chipmunk in the store last year; I seem to attract unique situations like this. It was my shift at the door to keep an eye on capacity and I looked up at the table by the window to see the little fellow checking out the selections on display. I was so surprised that it took me a moment to deliberate on the best course of action, before calling Bruce up to ask what to do about a chipmunk in the store. He thought I was asking if someone could bring a chipmunk into the store, and like any sane person said that probably wasn't a good idea. To which I clarified that ship had sailed already with the wee fellow I was inquiring about. We ended up grabbing a box and went to usher him into it, but in the confusion the chipmunk was suddenly nowhere to be seen. The logical explanation was that it decided to bypass our ill-hatched plan and ran back outside. Except when I looked up again ten or fifteen minutes later, the chipmunk was back! Cue more stoogery with me calling Bruce back and the two of us trying once again to herd the critter into a box -- only for it to jump onto me, freeze momentarily, then climb up inside my jacket! The stoogery continued when we stepped outside and I shucked my coat only to spend the better part of five minutes trying to convince said chipmunk to climb off and instead having it scramble up and down me like a tree until a Bruce and a passerby combined forces to shoo it off at last. How on earth a chipmunk ended up on 8th street to begin with, much less in the bookstore or on my person is a mystery. But I will forever be terribly disappointed no one caught the debacle on video. 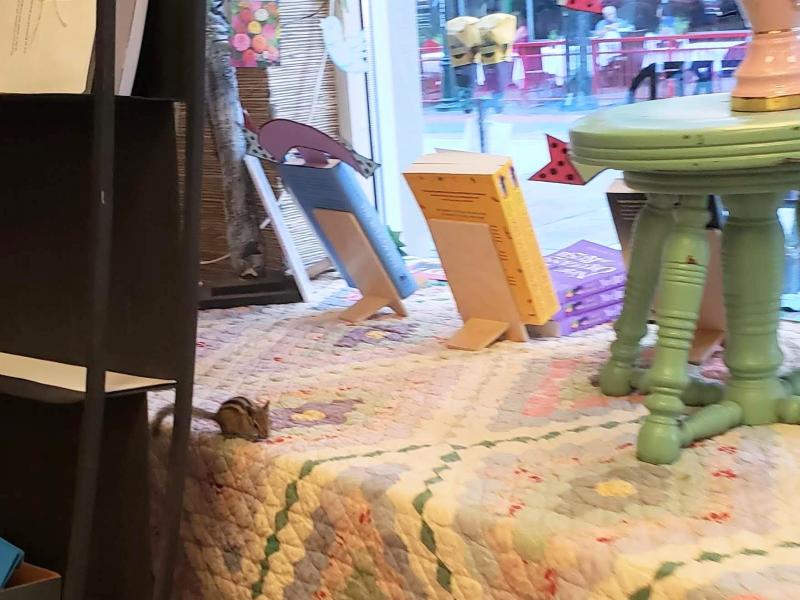