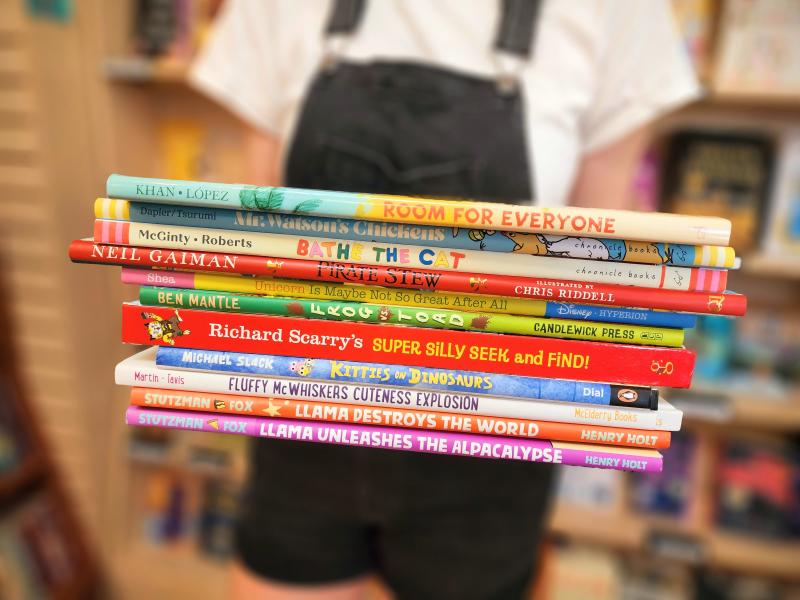 Room For Everyone by Naaz Khan

A young boy on a crowded bus discovers that, after some wiggles and giggles, there's room for everyone in this lighthearted rhyming picture book set in Zanzibar.

The dala dala rumbles and roars as Musa and Dada drive off to the shore--but the bus stops for multiple detours: "Do you need a ride? It's hotter than peppers out there in the sun! Come in, there's room for everyone!"

One stop becomes two stops which soon becomes ten, and Musa wonders when it will end: "How can any more people get in? We're already smushed like sardines in a tin!" But there's always room for one more, if you make the room, which is the heartwarming take-away from this bouncy, joyous tale in rhyme.

With rollicking rhythms, nonsensical refrains, and too many chickens to count, this modern classic will inspire unstoppable giggles and endless rereads. Bawka-bawka!

Mr. Watson has 456 chickens in the sink, on the bed, in the bread box. When his partner, Mr. Nelson, threatens to leave, Mr. Watson takes his chickens to town to sell only for them to escape! Young readers will follow Mr. Watson all around town as he gathers up his chickens. But, when they're all rounded up, does he have the heart to sell them? Does a different fate await these chickens?

Bathe the Cat by Alice B. McGinty

Bathe the floor? Sweep the dishes? This riotous romp of a picture book follows a frantic family as they try to get some chores done--with no help from the family cat, who keeps scrambling the list of chores with hilarious effects. Get ready for a rollicking read-aloud with a truly purrfect ending.

It's cleaning day, but the family cat will do anything to avoid getting a bath. So instead of mopping the floor or feeding the fish, the family is soon busy rocking the rug, vacuuming the lawn, and sweeping the dishes. Bouncy rhyme carries the story headlong into the growing hilarity, until finally Dad restores some kind of order--but will the cat avoid getting his whiskers wet?

Long John has a whole crew of wild pirates in tow, and--for one boy and his sister--he's about to transform a perfectly ordinary evening into a riotous adventure beneath a pirate moon. It's time to make some PIRATE STEW. Marvelously silly and gloriously entertaining, this tale of pirates, flying ships, doughnut feasts and some rather magical stew is perfect for all pirates, both young and old.

Unicorn is Maybe Not so Great After All by Bob Shea

Unicorn's on a quest to get his groove back in this must-have companion to the kid-favorite bestseller Unicorn Thinks He's Pretty Great.

You remember Unicorn. You know, Goat's friend? The one who can fly, make it rain cupcakes, and turn things into gold? On the first day of school, Unicorn expects to make his usual big splash. But no one pays him much attention--the other kids are much more interested in the latest trend in toys: rubber bands that look like other things. Unicorn comes up with a plan to get his mojo back, but his efforts turn out to be more annoying than impressive. Can Goat help him recover his magic, or is Unicorn destined to a life of mediocrity?

Frog vs. Toad by Ben Mantle

Two amphibians vie for superiority--before banding together against a toothy foe--in a humorous, light-hearted fable about seeing past differences.

Frog is a frog and Toad is a toad. They are clearly totally different from each other. So when an unlucky fly mistakes Frog and Toad for two frogs, the two are determined to set the record straight. After all, Toad is obviously stronger, while Frog is unmistakably the superior hopper . . . and before long, things start to get a bit heated among the amphibian population in the swamp. But when the two rivals have a close encounter with a snappy alligator, both Frog and Toad see the benefit of joining forces. Perhaps they're not so different after all?

Join Huckle Cat and friends in Busytown for lots of new adventures! Richard Scarry's Busytown is a wonderful place, with so many things to see and do!

Kitties on Dinosaurs by Michael Slack

A daring, dinosaur-climbing adventure leads to hilarious kitty hijinks in this adorable tale of perseverance

They're adorable! They're daring! They're kitties who love to climb things! And they won't give up until they've achieved their ultimate climbing dream: scaling the dinosaurs on nearby Dinosaur Island. The level-headed narrator warns the kitties that the dinosaurs look hungry, that their teeth are super big, that things look terribly bleak if they go through with climbing the dinosaurs. But these kitties have a plan. And then another plan. And then another...well, you get the idea. Can these fair kitties conquer their biggest challenge yet and avoid cat-astrophe?

Friendship is hard for Fluffy, a kitten so precious that anyone who looks at her explodes!

Meet Fluffy--an adorable kitten. So adorable, in fact, that anyone who sees her will spontaneously explode into balls of sparkles and fireworks. KABOOM! Poof. Poor Fluffy doesn't want anyone to get hurt, but everything she tries, even a bad haircut, just makes her cuter! So Fluffy runs away someplace no one can find her. Find out if there's any hope for Fluffy in this funny and subversive story about self-acceptance and finding friendship in unlikely places.

Meet Llama, the next great picture-book megastar, who has most definitely driven a bus and who loves tacos way more than you. He also loves cake, and that's where our story begins.

On Monday, Llama discovers a pile of cake, which he promptly eats.

On Tuesday, Llama squeezes into his dancing pants, which he promptly rips. The force of the rip creates a black hole (naturally).  Uh oh, what does the rest of the week hold in store for Llama??

Llama's back and ready to destroy the world AGAIN... this time with his best camelid, Alpaca!  Llama loves cooking. And baking. And, above all, eating. For breakfast, Llama makes one epic spread...as well as a big mess. But Llama hates cleaning. So by lunch, Llama has cooked up something really devious--an idea!--and by second lunch, Llama has cloned his most fastidious friend, Alpaca, to clean his house. And Llama doesn't stop at just one clone (Get it? “Alpaca-lypse”).

If you need more pandemonium suggestions, swing by either of our Rediscovered Books locations and we can spread a little book chaos in your life!