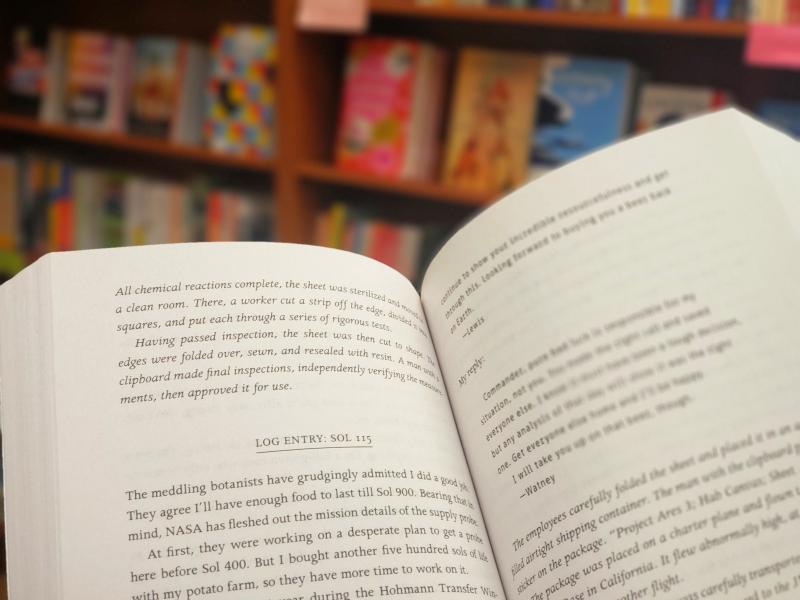 One of the things lost in the age of digital communication is the art of letter writing.  There are some of us who move beyond email, text, or 140 letters of Twitter to send the occasional thank you note, postcard, or even the odd letter.  And it is still really nice to get personal correspondence via "snail mail". Occasionally a thoughtful "Thank You" note shows up on my desk or a postcard from a dear friend graces my mailbox. I still have a "pen pal" relationship with a couple of older people and, while taking the time to write a letter requires planning, I hope that the result is as welcome on the receiving end as they are on mine.   There is something wholly satisfying with holding a piece of correspondence in your hand and having the chance to read it over and over.

The epistolary novel, one written in letter format, is always a pleasure for me.  I get to dip into someone else's world via their correspondence and that resonates in a way totally different than a standard novel.  Here are a few of our favourite epistolary novels to help you celebrate National Pen Pal Day.  Who knows maybe afterwards you will feel the urge to write a letter yourself.

Kady thought breaking up with Ezra was the worst thing she'd ever been through. That was before her planet was invaded. Now, with enemy fire raining down on them, Kady and Ezra are forced to fight their way onto one of the evacuating craft, with an enemy warship in hot pursuit.But the warship could be the least of their problems. A deadly plague has broken out and is mutating, with terrifying results; the fleet's AI, which should be protecting them, may actually be their biggest threat; and nobody in charge will say what's really going on. As Kady plunges into a web of data hacking to get to the truth, it's clear only one person can help her bring it all to light: Ezra.

Told through a fascinating dossier of hacked documents--including emails, schematics, military files, IMs, medical reports, interviews, and more-- Illuminae is the first book in a heart-stopping, high-octane trilogy about lives interrupted, the price of truth, and the courage of everyday heroes.

The Perks of Being a Wallflower by Stephen Chbosky

This book follows observant "wallflower" Charlie as he charts a course through the strange world between adolescence and adulthood. First dates, family drama, and new friends. Sex, drugs, and The Rocky Horror Picture Show. Devastating loss, young love, and life on the fringes. Caught between trying to live his life and trying to run from it, Charlie must learn to navigate those wild and poignant roller-coaster days known as growing up.

On Earth We are Briefly Gorgeous by Ocean Vuong

On Earth We're Briefly Gorgeous is a heartbreakingly beautiful and raw letter from a son to a mother who cannot read. Written when the speaker, Little Dog, is in his late twenties, the letter unearths a family's history that began before he was born -- a history whose epicenter is rooted in Vietnam -- and serves as a doorway into parts of his life his mother has never known, all of it leading to an unforgettable revelation. At once a witness to the fraught yet undeniable love between a single mother and her son, it is also a brutally honest exploration of race, class, and masculinity. Asking questions central to our American moment, immersed as we are in addiction, violence, and trauma, but undergirded by compassion and tenderness,

The Martian by Andy Wier

Six days ago, astronaut Mark Watney became one of the first people to walk on Mars. Now, he's sure he'll be the first person to die there. After a dust storm nearly kills him and forces his crew to evacuate while thinking him dead, Mark finds himself stranded and completely alone with no way to even signal Earth that he's alive--and even if he could get word out, his supplies would be gone long before a rescue could arrive. Chances are, though, he won't have time to starve to death. The damaged machinery, unforgiving environment, or plain-old human error are much more likely to kill him first. But Mark isn't ready to give up yet. Drawing on his ingenuity, his engineering skills--and a relentless, dogged refusal to quit--he steadfastly confronts one seemingly insurmountable obstacle after the next. Will his resourcefulness be enough to overcome the impossible odds against him?

Ella Minnow Pea:  A Novel in Letters by Mark Dunn

Ella Minnow Pea is a girl living happily on the fictional island of Nollop off the coast of South Carolina. Nollop was named after Nevin Nollop, author of the immortal phrase containing all the letters of the alphabet, "The quick brown fox jumps over the lazy dog." Now Ella finds herself acting to save her friends, family, and fellow citizens from the encroaching totalitarianism of the island's Council, which has banned the use of certain letters of the alphabet as they fall from a memorial statue of Nevin Nollop. As the letters progressively drop from the statue they also disappear from the novel. The result is a love letter to alphabetarians and logomaniacs everywhere.

Love and Saffron:  A Novel of Friendship, Food, and Love by Kim Fay

When twenty-seven-year-old Joan Bergstrom sends a fan letter--as well as a gift of saffron--to fifty-nine-year-old Imogen Fortier, a life-changing friendship begins. Joan lives in Los Angeles and is just starting out as a writer for the newspaper food pages. Imogen lives on Camano Island outside Seattle, writing a monthly column for a Pacific Northwest magazine, and while she can hunt elk and dig for clams, she's never tasted fresh garlic--exotic fare in the Northwest of the sixties. As the two women commune through their letters, they build a closeness that sustains them through the Cuban Missile Crisis, the assassination of President Kennedy, and the unexpected in their own lives.

Food and a good life--they can't be separated. It is a discovery the women share, not only with each other, but with the men in their lives. Because of her correspondence with Joan, Imogen's decades-long marriage blossoms into something new and exciting, and in turn, Joan learns that true love does not always come in the form we expect it to. Into this beautiful, intimate world comes the ultimate test of Joan and Imogen's friendship--a test that summons their unconditional trust in each other.

Meet me at the Museum by Anne Youngson

In Denmark, Professor Anders Larsen, an urbane man of facts, has lost his wife and his hopes for the future. On an isolated English farm, Tina Hopgood is trapped in a life she doesn't remember choosing. Both believe their love stories are over. Brought together by a shared fascination with the Tollund Man, subject of Seamus Heaney's famous poem, they begin writing letters to one another. And from their vastly different worlds, they find they have more in common than they could have imagined. As they open up to one another about their lives, an unexpected friendship blooms. But then Tina's letters stop coming, and Anders is thrown into despair. How far are they willing to go to write a new story for themselves?

The Turn of the Key by Ruth Ware

When she stumbles across the ad, she's looking for something else completely. But it seems like too good an opportunity to miss--a live-in nannying post, with a staggeringly generous salary. And when Rowan Caine arrives at Heatherbrae House, she is smitten--by the luxurious "smart" home fitted out with all modern conveniences, by the beautiful Scottish Highlands, and by this picture-perfect family. What she doesn't know is that she's stepping into a nightmare--one that will end with a child dead and herself in prison awaiting trial for murder.Writing to her lawyer from prison, she struggles to explain the events that led to her incarceration. It wasn't just the constant surveillance from the home's cameras, or the malfunctioning technology that woke the household with booming music, or turned the lights off at the worst possible time. It wasn't just the girls, who turned out to be a far cry from the immaculately behaved model children she met at her interview. It wasn't even the way she was left alone for weeks at a time, with no adults around apart from the enigmatic handyman. It was everything.

She knows she's made mistakes. She admits that she lied to obtain the post, and that her behavior toward the children wasn't always ideal. She's not innocent, by any means. But, she maintains, she's not guilty--at least not of murder--but somebody is.

Among the ashes of a dying world, an agent of the Commandment finds a letter. It reads: Burn before reading.Thus begins an unlikely correspondence between two rival agents hellbent on securing the best possible future for their warring factions. Now, what began as a taunt, a battlefield boast, becomes something more. Something epic. Something romantic. Something that could change the past and the future. Except the discovery of their bond would mean the death of each of them. There's still a war going on, after all. And someone has to win. That's how war works, right?

The white tiger of this novel is Balram Halwai, a poor Indian villager whose great ambition leads him to the zenith of Indian business culture, the world of the Bangalore entrepreneur. On the occasion of the president of China's impending trip to Bangalore, Balram writes a letter to him describing his transformation and his experience as driver and servant to a wealthy Indian family, which he thinks exemplifies the contradictions and complications of Indian society.

A Tale for the Time Being by Ruth Ozeki

In Tokyo, sixteen-year-old Nao has decided there's only one escape from her aching loneliness and her classmates' bullying. But before she ends it all, Nao first plans to document the life of her great grandmother, a Buddhist nun who's lived more than a century. A diary is Nao's only solace--and will touch lives in ways she can scarcely imagine. Across the Pacific, we meet Ruth, a novelist living on a remote island who discovers a collection of artifacts washed ashore in a Hello Kitty lunchbox--possibly debris from the devastating 2011 tsunami. As the mystery of its contents unfolds, Ruth is pulled into the past, into Nao's drama and her unknown fate, and forward into her own future.

Bridget Jones penned a diary; Roxy writes letters. Specifically: she writes letters to her hapless, rent-avoidant ex-boyfriend--and current roommate--Everett. This charming and funny twenty-something is under-employed (and under-romanced), and she's decidedly fed up with the indignities she endures as a deli maid at Whole Foods (the original), and the dismaying speed at which her beloved Austin is becoming corporatized. When a new Lululemon pops up at the intersection of Sixth and Lamar where the old Waterloo Video used to be, Roxy can stay silent no longer. As her letters to Everett become less about overdue rent and more about the state of her life, Roxy realizes she's ready to be the heroine of her own story. She decides to team up with her two best friends to save Austin--and rescue Roxy's love life--in whatever way they can. But can this spunky, unforgettable millennial keep Austin weird, avoid arrest, and find romance--and even creative inspiration--in the process?