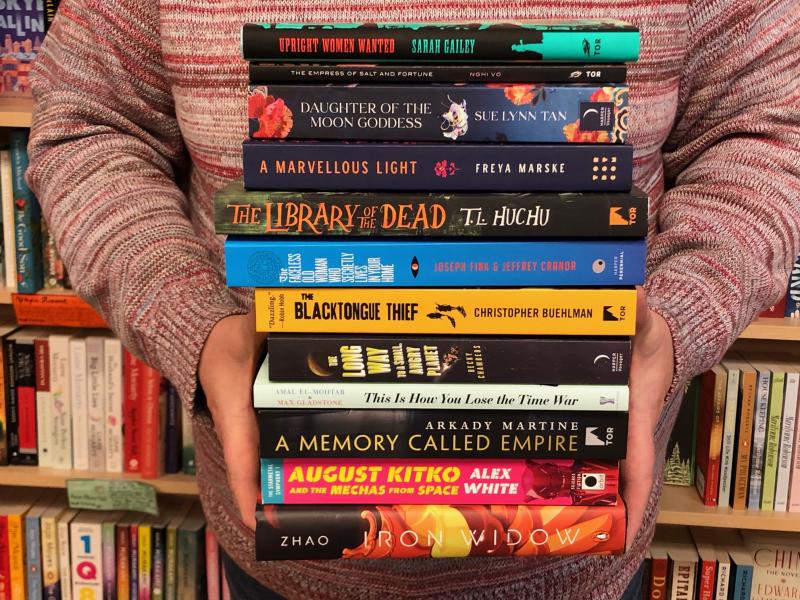 It is a perfect time of year to venture into a new genre or to read some favorites in a genre that you adore.  In a post holiday slump, I was looking for something to perk up the occasionally dreary days as I wait for warmer weather to arrive.  I am not normally a Sci-Fi/Fantasy reader, but I am always game for engaging characters and a good story. When I reached out to my beloved coworkers for suggestions and, shockingly enough (not really), they gave me a wonderful list of books to "take me away".  I must say, their choices were spot on and such a pleasure to read.  So I will share them with you:

Hanna - Esther is running from a marriage she wants no part of. In her quest for freedom she stows away with some Librarians. These road hardened women show her that there are many ways to live and that Esther doesn’t have to be afraid of who she is. Filled with gunfights, adventure, and just a dash of romance this wild west meets dystopian future novella has it all.

The Empress of Salt and Fortune by Nghi Vo

Becca - The Empress of Salt and Fortune will pull you in, hypnotize you , and then leave you in the dust to piece it all together again in the most beautiful of ways. Do you understand?

Daughter of the Moon Goddess by Sue Lynn Tan

Baylee - Growing up on the moon, Xingyin is accustomed to solitude, unaware that she is being hidden from the feared Celestial Emperor who exiled her mother for stealing his elixir of immortality. But when Xingyin's magic flares and her existence is discovered, she is forced to flee her home, leaving her mother behind. Alone, powerless, and afraid, she makes her way to the Celestial Kingdom, a land of wonder and secrets. Disguising her identity, she seizes an opportunity to learn alongside the emperor's son, mastering archery and magic, even as passion flames between her and the prince. To save her mother, Xingyin embarks on a perilous quest, confronting legendary creatures and vicious enemies. But when treachery looms and forbidden magic threatens the kingdom, she must challenge the ruthless Celestial Emperor for her dream--striking a dangerous bargain in which she is torn between losing all she loves or plunging the realm into chaos.

A Marvelous Light by Freya Marske

The Library of the Dead by T.L. Huchu

Jane Alice - Ropa dropped out of school to become a ghost talker - and she now speaks to Edinburgh's dead, carrying messages to the living. A girl's gotta earn a living, and it seems harmless enough. Until, that is, the dead whisper that someone's bewitching children - leaving them husks, empty of joy and life. It's on Ropa's patch, so she feels honour-bound to investigate. But what she learns will change her world.  She'll dice with death (not part of her life plan . . .), discovering an occult library and a taste for hidden magic. She'll also experience dark times. For Edinburgh hides a wealth of secrets, and Ropa's gonna hunt them all down.

Kvothe - In the town of Night Vale, there's a faceless old woman who secretly lives in everyone's home, but no one knows how she got there or where she came from...until now. Part The Haunting of Hill House, part The Count of Monte Cristo, The Faceless Old Woman Who Lives in Your Home is a lively tale of loyalty, betrayal, and revenge, that will have you looking around the corners of your own home...just in case.

The Blacktongue Thief by Christopher Buehlman

Katie - I have honestly never read a book like this one. Filled with fantastical magic, characters, and lands, this is a must read. The originality of this book left me amazed and hungry for more.

The Long Way to a Small Angry Planet by Becky Chambers

Rebecca - If you love the show "Firefly", you will LOVE this book! Wonderful cast of intergalactic characters jetting through space together on adventures.

Hanna - Among the ashes of a dying world, an agent of the Commandment finds a letter. It reads: Burn before reading. Thus begins an unlikely correspondence between two rival agents hellbent on securing the best possible future for their warring factions. Now, what began as a taunt, a battlefield boast, becomes something more. Something epic. Something romantic. Something that could change the past and the future. Except the discovery of their bond would mean the death of each of them. There's still a war going on, after all. And someone has to win. That's how war works, right?

Bruce - Ambassador Mahit Dzmare arrives in the center of the multi-system Teixcalaanli Empire only to discover that her predecessor, the previous ambassador from their small but fiercely independent mining Station, has died. But no one will admit that his death wasn't an accident--or that Mahit might be next to die, during a time of political instability in the highest echelons of the imperial court. Now, Mahit must discover who is behind the murder, rescue herself, and save her Station from Teixcalaan's unceasing expansion--all while navigating an alien culture that is all too seductive, engaging in intrigues of her own, and hiding a deadly technological secret--one that might spell the end of her Station and her way of life--or rescue it from annihilation. (You will definitely want to read the sequel A Desolation Called Peace.)

August Kitko and the Mechas from Space by Alex White

Hanna - As someone who loves giant mechas and has a background in classical music this book was an utter delight to find. Not to mention August is an incredibly relatable character when it comes to facing down the apocalypse. I was on the edge of my seat for the entire book, unsure just what twist would come next. I can’t wait to see what White does in the sequel.

Jacey - What a debut for Xiran Jay Zhao! I was hooked from the prologue and couldn't wait to see where the next page led. Every element flowed together to make a spectacular sci-fi adventure with action, romance, and twists that readers won't see coming till it hits you. (Who does not like the combination of Chinese mythology, a strong and angry female protagonist, political intrigue, a smattering of romance, and giant metal monsters??)