Start your Summer Reads off right 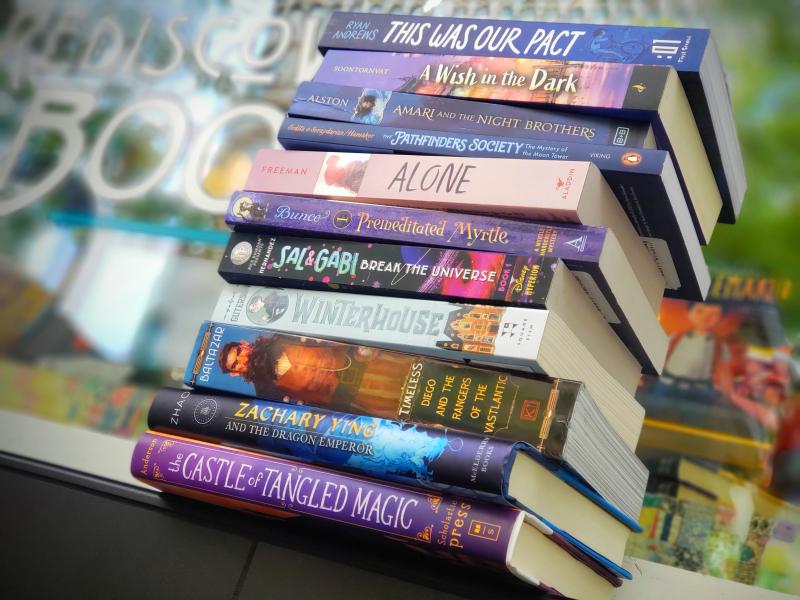 Whether it is raining or sunny or windy or warm, it is the PERFECT time for a little Mystery and Adventure in your life.  And guess what?  We can help.  Here are a few suggestions to kick your summer reading off right.  It does not matter if you are a kid or a grown up (we read these books and LOVE LOVE LOVE them), a good page turning adventure is always in order.  Here are just a few that we wanted to share with you:

The Castle of Tangled Magic by Sophie Anderson

Twelve-year-old Olia knows a thing or two about secrets. Her parents are the caretakers of Castle Mila, a soaring palace with golden domes, lush gardens, and countless rooms. Literally countless rooms. There are rooms that appear and disappear, and rooms that have been hiding themselves for centuries. The only person who can access them is Olia. She has a special bond with the castle, and it seems to trust her with its secrets.

But then a violent storm rolls in . . . a storm that skips over the village and surrounds the castle, threatening to tear it apart. While taking cover in a rarely-used room, Olia stumbles down a secret passage that leads to a part of Castle Mila she's never seen before. A strange network of rooms that hide the secret to the castle's past . . . and the truth about who's trying to destroy it.

Zachary Ying and the Dragon Emperor by Xiran Jay Zhao - Freddie and Rebecca G give this one a 5 thumbs up!!!

Zachary Ying never had many opportunities to learn about his Chinese heritage. His single mom was busy enough making sure they got by, and his schools never taught anything except Western history and myths. So Zack is woefully unprepared when he discovers he was born to host the spirit of the First Emperor of China for a vital mission: sealing the leaking portal to the Chinese underworld before the upcoming Ghost Month blows it wide open.

The mission takes an immediate wrong turn when the First Emperor botches his attempt to possess Zack's body and binds to Zack's AR gaming headset instead, leading to a battle where Zack's mom's soul gets taken by demons. Now, with one of history's most infamous tyrants yapping in his headset, Zack must journey across China to heist magical artifacts and defeat figures from history and myth, all while learning to wield the emperor's incredible water dragon powers. And if Zack can't finish the mission in time, the spirits of the underworld will flood into the mortal realm, and he could lose his mom forever.

Timeless:  Diego and the Rangers of the Vastlantic by Armand Baltazar

You've never seen Earth like this before: continents reshaped, oceans re-formed, cities rebuilt, and mountains sculpted anew. Dinosaurs roam the plains alongside herds of buffalo, and giant robots navigate the same waters as steam-powered ships.This is the world Diego Ribera was born into. The past, present, and future coexisting together. In New Chicago, Diego's middle school hallways buzz with kids from all eras of history and from cultures all over the world. The pieces do not always fit together neatly, but this is the world he loves.

There are those, however, who do not share his affection. On his thirteenth birthday, Diego learns of a special gift he has within, a secret that is part of something much bigger--something he cannot understand. When his father, New Chicago's top engineer, is taken by the Aeternum, Diego must rescue him and prevent this evil group from disrupting the fragile peace humanity has forged.

Eleven-year-old Elizabeth spends Christmas break at Winterhouse Hotel under strange circumstances. There, she discovers that she has magic, and her love of puzzles helps her solve a mystery in this amazing first book in a must read trilogy.  If you love puzzles, you will love this series!

Sal and Gaby Break the Universe by Carlos Hernandez

What would you do if you had the power to reach through time and space and retrieve anything you want, including your mother, who is no longer living (in this universe, anyway)?
When Sal Vidon meets Gabi Real for the first time, it isn't under the best of circumstances. Sal is in the principal's office for the third time in three days, and it's still the first week of school. Gabi, student council president and editor of the school paper, is there to support her friend Yasmany, who just picked a fight with Sal. She is determined to prove that somehow, Sal planted a raw chicken in Yasmany's locker, even though nobody saw him do it and the bloody poultry has since mysteriously disappeared. Sal prides himself on being an excellent magician, but for this sleight of hand, he relied on a talent no one would guess . . . except maybe Gabi, whose sharp eyes never miss a trick. When Gabi learns that he's capable of conjuring things much bigger than a chicken--including his dead mother--and she takes it all in stride, Sal knows that she is someone he can work with. There's only one slight problem: their manipulation of time and space could put the entire universe at risk.

Twelve-year-old Myrtle Hardcastle has a passion for justice and a Highly Unconventional obsession with criminal science. Armed with her father's law books and her mum's microscope, Myrtle studies toxicology, keeps abreast of the latest developments in crime scene analysis, and Observes her neighbors in the quiet village of Swinburne, England. When her next-door neighbor, a wealthy spinster and eccentric breeder of rare flowers, dies under Mysterious Circumstances, Myrtle seizes her chance. With her unflappable governess, Miss Ada Judson, by her side, Myrtle takes it upon herself to prove Miss Wodehouse was murdered and find the killer, even if nobody else believes he --not even her father, the town prosecutor.

When twelve-year-old Maddie hatches a scheme for a secret sleepover with her two best friends, she ends up waking up to a nightmare. She's alone--left behind in a town that has been mysteriously evacuated and abandoned.

With no one to rely on, no power, and no working phone lines or internet access, Maddie slowly learns to survive on her own. Her only companions are a Rottweiler named George and all the books she can read. After a rough start, Maddie learns to trust her own ingenuity and invents clever ways to survive in a place that has been deserted and forgotten. As months pass, she escapes natural disasters, looters, and wild animals. But Maddie's most formidable enemy is the crushing loneliness she faces every day. Can Maddie's stubborn will to survive carry her through the most frightening experience of her life?

The Pathfinders Society: The Mystery of the Moon Tower by Francesco Sedita and Prescott Seraydarian

Kyle is a new kid in town who likes to draw. Vic is a cool cheerleader who's secretly a math whiz. Quiet Beth is a history buff, while goofball Harry likes performing magic tricks, with the help of his patient wingman, Nate. Five kids unlikely to form a team, for sure.But then they're thrown together at summer camp, where they watch a grainy old movie about the history of their town, Windrose, and one of its illustrious citizens of a bygone era: the intrepid explorer-inventor Henry Merriweather. He's the one who established their camp. Merriweather's Camp Pathfinders' motto? Plus Ultra more beyond!

The five kids soon find there is indeed more beyond in their pokey town with its weird weather and sudden geysers of smelly air. Deciphering a route of historical markers leads them to Merriweather's old castle, which is lined with ornate, beautiful tiles in hallways that lead to secret rooms full of odd objects--and where time itself is warped! Kyle, Vic, Beth, Harry, and Nate witness scenes from Merriweather's past and realize his experiments and eccentricities are pointing toward a path--that could lead to the rumored lost treasure of Windrose.This is the path our heroes are meant to follow, on a journey that will take them back and forth through time, through woods, and across waterways revealed by moonlight, right up to the looming Moon Tower itself--which holds Merriweather's secret . . . and the treasure!

Amari and the Night Brothers by BB Alston - This is one of Jackie's FAVES!

Amari Peters has never stopped believing her missing brother, Quinton, is alive. Not even when the police told her otherwise, or when she got in trouble for standing up to bullies who said he was gone for good. So when she finds a ticking briefcase in his closet, containing a nomination for a summer tryout at the Bureau of Supernatural Affairs, she's certain the secretive organization holds the key to locating Quinton--if only she can wrap her head around the idea of magicians, fairies, aliens, and other supernatural creatures all being real.

Now she must compete for a spot against kids who've known about magic their whole lives. No matter how hard she tries, Amari can't seem to escape their intense doubt and scrutiny--especially once her supernaturally enhanced talent is deemed "illegal." With an evil magician threatening the supernatural world, and her own classmates thinking she's an enemy, Amari has never felt more alone. But if she doesn't stick it out and pass the tryouts, she may never find out what happened to Quinton.

A Wish in the Dark by Christine Soontornvat

All light in Chattana is created by one man -- the Governor, who appeared after the Great Fire to bring peace and order to the city. For Pong, who was born in Namwon Prison, the magical lights represent freedom, and he dreams of the day he will be able to walk among them. But when Pong escapes from prison, he realizes that the world outside is no fairer than the one behind bars. The wealthy dine and dance under bright orb light, while the poor toil away in darkness. Worst of all, Pong's prison tattoo marks him as a fugitive who can never be truly free.

Nok, the prison warden's perfect daughter, is bent on tracking Pong down and restoring her family's good name. But as Nok hunts Pong through the alleys and canals of Chattana, she uncovers secrets that make her question the truths she has always held dear. Set in a Thai-inspired fantasy world, Christina Soontornvat's twist on Victor Hugo's Les Misérables is a dazzling, fast-paced adventure that explores the difference between law and justice -- and asks whether one child can shine a light in the dark.

This Was Our Pact by Ryan Andrews - Jane Alice recommends this one!

It's the night of the annual Autumn Equinox Festival, when the town gathers to float paper lanterns down the river. Legend has it that after drifting out of sight, they'll soar off to the Milky Way and turn into brilliant stars, but could that actually be true? This year, Ben and his classmates are determined to find out where those lanterns really go, and to ensure success in their mission, they've made a pact with two simple rules: No one turns for home. No one looks back.

The plan is to follow the river on their bikes for as long as it takes to learn the truth, but it isn't long before the pact is broken by all except for Ben and (much to Ben's disappointment) Nathaniel, the one kid who just doesn't seem to fit in.

Together, Nathaniel and Ben will travel farther than anyone has ever gone, down a winding road full of magic, wonder, and unexpected friendship*.

*And a talking bear.